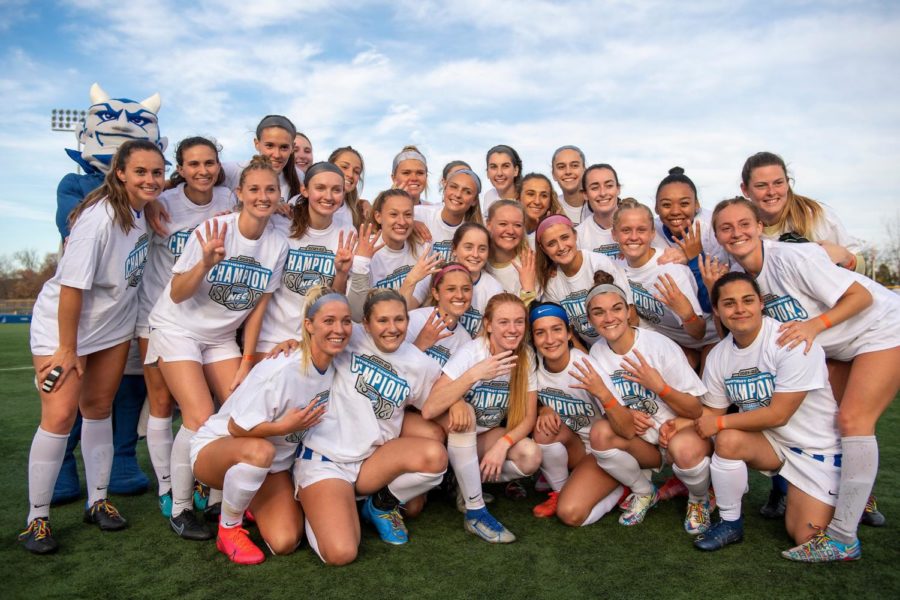 The Blue Devils were led by junior Roma McLaughlin, who had a team-leading 21 points and nine goals scored, with six game-winning goals. Senior Erica Bardes and redshirt freshman Kelly Brady tied for the team lead in assists with five each. Junior goalkeeper Amanda McQuillan started 17 games and made 64 saves while only allowing 19 goals against.

The Blue Devils were also the recipient of the United Soccer Coaches Team Ethics and Sportsmanship Award for the 2021 season. They were honored at the bronze level. The levels are calculated by adding the total number of penalty cards the team’s players and coaches received divided by the total number of games the team played. Only 84 teams across all men’s and women’s NCAA soccer divisions were honored.

Individual Blue Devils were also honored for their contributions to the 2021 season. Bardes was honored with the Northeast Conference Fall Scholar-Athlete award for the third time. She also took home the Northeast Conference Defensive Player of the Year award in 2021. Bardes was joined by McLaughlin, McQuillan, Brady, and senior Tess Atkinson in being voted to the New England Women’s Intercollegiate Soccer Association All-New England Team.

The coaches also brought home some awards. Assistant coach Jen Prozzo was named Division I Assistant Coach of the Year by the New Egland Women’s Intercollegiate Soccer Association while coach D’Arcy has recently been inducted into the Connecticut Soccer Hall of Fame for his contributions to the game of soccer at CCSU and around the state.

With many of the critical contributors expected to return next season, the Blue Devils will look to repeat as Northeast Conference Champions. The two seniors, Bardes and Aktinson, will be graduating this spring and will not be with the team next season.