Netflix It: “The Cuphead Show!” 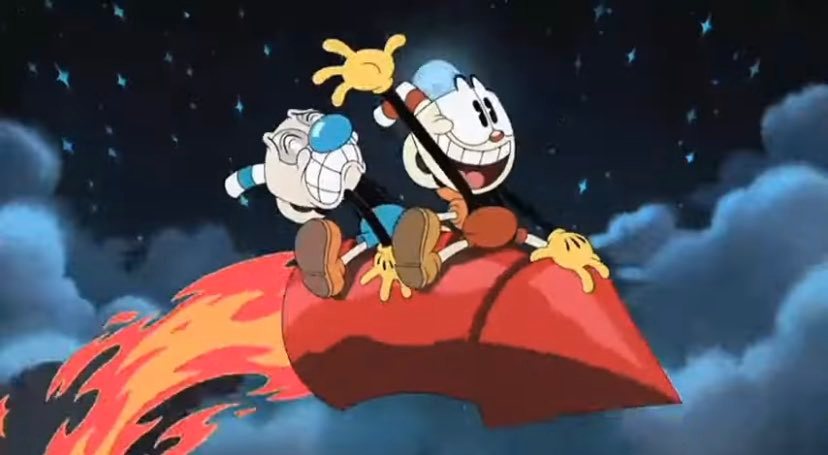 A scene from "The Cuphead Show!" Opening.

“The Cuphead Show!” was finally released on Netflix on Friday, Feb. 18, three years after its first announcement, made back in July of 2019. The animated series is based on the run-and-gun video game “Cuphead,” which won the Game Award for Best Art Direction in 2017.

The game is well-known for its use of “Rubber hose animation,” a classic cartoon animation style often used in cartoons made throughout the 1920s and 30s. Every character and enemy in the game was drawn by hand on paper 24 times per second. This led to a massive workload of nearly 50,000 individual drawings for the entire game. Despite being in development for seven years, “Cuphead” was an enormous success for its unique art style and gameplay challenge. Although the animation for the series is different from the game, it’s still hand-drawn.

“The Cuphead Show!” features many characters from the game, including Cuphead himself, Mugman, King Dice, and the main antagonist, The Devil. Like the video game, the show’s plot focuses on Cuphead and his brother, Mugman, as they go on wacky adventures while trying to escape from The Devil, who’s trying to steal the two cups’ souls after they lost a game.

In a society where CGI animation has taken over the industry, “The Cuphead Show!” is a refreshing breath of fresh air and a great reminder that traditional and “old-school” animation can still be used for shows in the modern era. The comedy is another excellent part of the series. Personally, the humor reminds me of many 90s cartoons like Ren and Stimpy, CatDog, and Spongebob Squarepants. The cartoon also has a great score with music original to the show and the video game.

“The Cuphead Show!” is fun for the whole family, but what about the fandom?

On its own, the show is enjoyable with a lot of easter eggs and references to find, but as a fan of the game, there are two main critiques I have of the series:

The first criticism I had was the lack of bosses from the game appearing in the show. For those who have not played “Cuphead”, the game is primarily a “Boss Rush,” where Cuphead (and Mugman if there is a player two) have to take down a unique boss in a different setting at almost every level.

Out of the 19 bosses in the game, only five appear, with one of them only being on screen for a single scene. This fact annoys me, especially when characters who aren’t from the game get more screen time than the enemies who made “Cuphead” so lovable in the first place.

The second critique is the creators’ decision not to include a casino in the show. Once again, a core aspect of the game is missing. “Cuphead” centers around Cuphead gambling at The Devil’s Casino and betting on his and Mugman’s souls. Since he lost, Cuphead and Mugman owe their souls to The Devil. To be free from The Devil, Cuphead and Mugman have to collect soul contracts from all the bosses who also owe their souls for losing a bet at the casino. Without the casino, the plot of the game would not make sense.

Although the cartoon has its own story, it still tries to capture the game’s central conflict by replacing the casino with a carnival and a game show for the series. The conflict has more of an impact in the game because of its “anti-gambling” message. Although the reason behind the change is not explained, I believe it was done for censorship purposes because “The Cuphead Show!” has a TV-Y7 rating. It’s too much to have a casino in a “Kids show” despite the game being rated E10+, while it’s not too much for the show to include The Devil stealing souls.

“Cuphead” recreates the vibe of a specific era in American entertainment before animation figured out its massive audience in children. It’s bright and colorful but with a sinister edge to it. It’s like old Disney cartoons where Mickey Mouse gets drunk or “Tom and Jerry” start pulling out shotguns. “The Cuphead Show!” tries to find a balance between the darker aspects of old animation and the light-hearted elements of modern animation and manages to accomplish this pretty well.

“The Cuphead Show!” was a fun and enjoyable experience. I strongly feel this show could be a bridge between old and new generations because of the references to older cartoons and their gimmicks and the connections that only game fans understand.