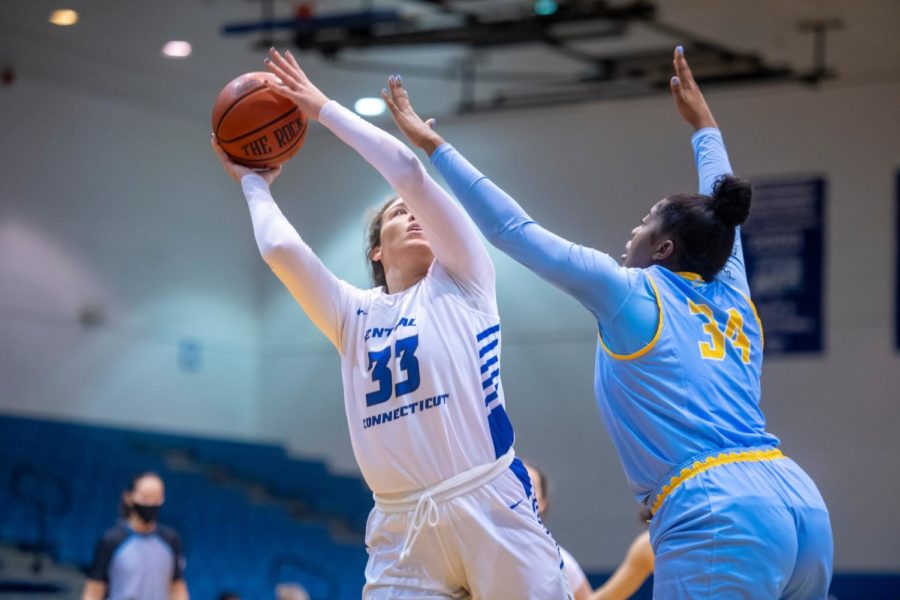 The Central Connecticut State University women’s basketball team are coming off back-to-back losses this past week against Mount Saint Mary College and Long Island University. The final score of those games were 71-60 and 74-67, respectively.

The Blue Devils hosted the Mount Saint Mary Mountaineers at Detrick Gymnasium on Sunday, Jan. 23 in what was their first match up of the season against the defending Northeast Conference champions.

CCSU went into the game against the Mountaineers with a conference record of 1-5 and an overall record of 3-11, which lands them in last place of the Northeast Conference standings. While Mount Saint Mary found themselves sitting in third place of the Northeast Conference standings with a 4-2 conference record and a 6-8 overall record, as they look to make a push for a return to the NEC tournament to defend their title.

The Blue Devils’ offense struggled early in the game shooting only 13% from the field while the Mountaineers made 50% of their shots from the field in the first quarter.

Mount Saint Mary maintained momentum through the second quarter until CCSU’s sophomore forward Meghan Keneflick nailed a three pointer on Central’s final possession of the first half to give the Blue Devils some positive momentum going into the break.

Due to the Central’s poor shooting in the first quarter Mount Saint Mary enjoyed a 33-19 lead at halftime. But the Blue Devils would fight back in the third. They opened the second half by scoring eight straight unanswered points to bring the score to 33-27 with Mount Saint Mary still on top.

After an impressive fight to get back in it by the Blue Devils, the Mountaineers regained control of the game in the fourth by hitting their threes and playing defense. The Blue Devils shot an impressive 46% from behind the three-point line and shot 45% from the field for the game. But the most telling statistic in this one was the number of turnovers the Blue Devils committed. They turned the ball over a total of 25 times, while the Mountaineers only committed 15 turnovers.

After the tough loss to Mount Saint Mary the Blue Devils traveled to Brooklyn, NY to face off against the Long Island University Sharks on Thursday, Jan. 27. The two teams faced off once already this season with the Sharks taking a 62-51 victory less than two weeks ago on Saturday, Jan. 15. LIU entered this game with a 2-5 conference record and a 2-14 overall record which is good enough for eighth place in the conference.

Berube led the way for the Blue Devils against the Sharks. She went 8 for 11 from the field with 21 points on the night and became just the 17th player in Central Connecticut State University women’s basketball history to score 1,000 points in their career.

The Blue Devils’ offense got off to a hot start in this one by coming out of the gates shooting the three. They made four out of five from three-point land in the first quarter that led them to an early 22-16 lead at the end of the first.

The Sharks bench stepped up in the second quarter and outscored the Blue Devils bench 39-14 which helped LIU narrow CCSU’s lead to just two points.

CCSU held a 34-32 lead coming out of halftime, but that would not last long. A three pointer from LIU’s freshman guard Danielle Grim early in the third gave the Sharks a 37-36 lead. But back-to-back buckets from Berube helped the Blue Devils regain the lead and hold a 56-55 lead going into the fourth quarter.

Up next for the Blue Devils is a home game against Fairleigh Dickinson on Sunday, Jan. 30 that was originally scheduled for Saturday, Jan. 29. The game was pushed back a day due to a snowstorm. CCSU goes into the game against FDU looking to break a five-game losing streak.