Revival: The NBMAA’s rise from Covid 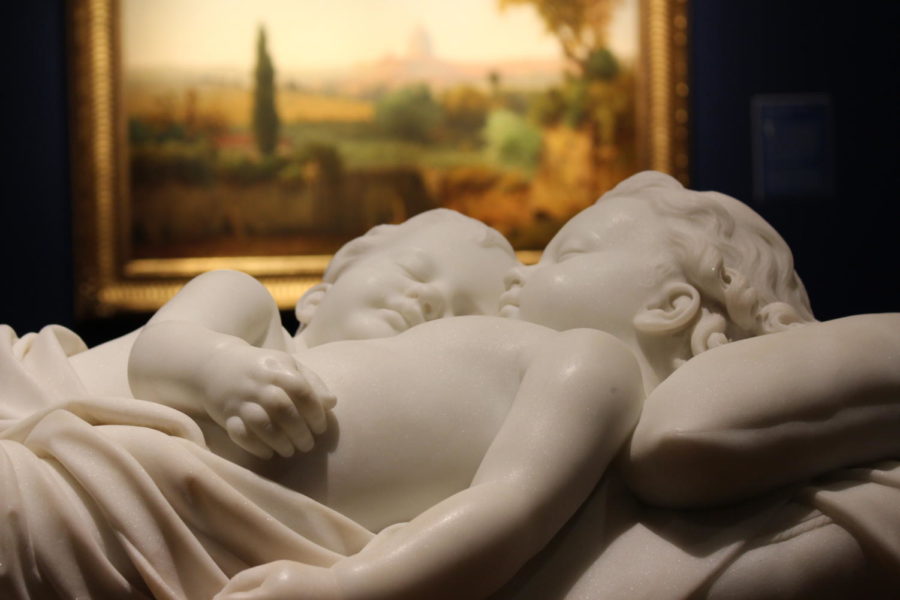 Elaine Hobart did not seem to give tours for other people. The way she spoke, you would think it was all for herself—so she could fall in love with her museum’s gallery walls over and over.

As I followed her around the New Britain Museum of American Art, it occurred to me that she was aware of this. She would often expel pieces of history to the room itself as if speaking it aloud would ensure its preservation.
“You would think it was all for herself—so she could fall in love with her museum’s gallery walls over and over.”
It was only when someone asked a question that the spell would break, and she would be launched back into reality—her dreamy eyes searching for whoever had spoken. “Oh yes,” she would reply as if the query itself was a gift.

During the COVID-19 pandemic, countless artists dove into their work, creating pieces reflective of our communities’ struggles. As restrictions have lifted, the New Britain Museum of American Art (NBMAA) continued to shine a light on local voices. And his isn’t the first time they’ve done it.

The NBMAA was famously one of the first institutions in New Britain to reopen publicly after the Great Depression—yet another time great tragedy brought great art.

I went to see that art on New Britain’s sesqu

icentennial birthday and consequently was led around by the lovely Elaine while visitors wandered the museum’s halls.

Jennifer Wen Ma: An Inward Sea is currently in the William L. and Bette Batchelor Gallery until Oct. 24. The piece captures an oral history of New Britain residents’ experiences during the global pandemic while displaying their silhouettes through a spotlight. The voices are enhanced by the sculptured sea around them and the giant swinging pair of pendulums.

Standing in the Inward Sea was like standing a storm. Listening to the voices on the interview audio track led you through a series of stories–all depicting the fever dream known as Lockdown. It was visible on the faces of visitors as well; the scars that the past few years had given us. As they listened to the stories of strangers in the spotlight, tears threatened to spill from a mothers eyes and a man held his partners hand just a little tighter.

The New Britain Museum of American Art (NBMAA) was founded in 1903 at the Landers House. It was christened the first museum of strictly American art in the country and helped support artists locally and nationally.

In conjunction with New Britain’s sesquicentennial year and the reopening of the Lander’s House, the NBMAA is presenting a yearlong installation comprising historical images and artworks from their permanent collection charting the museum’s history and identity.

The “New Britain at a Glance” tour was on the city’s birthday weekend that was free to the public. It was a tour celebrating New Britain, artists architecture, Walnut Hill Park, landers house, stretch beauty, the museum grounds, which was very popular and may be repeated in the future.

They were three women, likely in their 60’s, who had toured with. They’d visited the NBMAA dozens of times. They were self-proclaimed regulars and seemed to know almost as much about the place and the exhibits as the docents. Their banter and bickering brought humor to the pieces, as well as some much-needed breaks from Elaine’s adoring speeches.

Along with local revival comes protective marketing—and who can blame anyone for that? Unfortunately, despite my many fruitful conversations with the docents and staff, there was only one person I could speak with on record: Lisa Lappe, the head of NBMAA Marketing.

Sol LeWitt’s prints provide as many questions as they do answers. You’d look at them and think they’d be pleasing to any right-minded individual. Straight lines, mathematic equations, and bold boisterous colors. There is comething incredibly comforting in it’s simplicity, and yet, the longer you look, the more complications you find. opposite colors, stitches, and notes hid in crevasses and corners. All of a sudden the order you found in his print because a piece of organized chaos, and it make you question everything you’ve seen all over again.

LeWitt’s Strict Beauty prints are staying at the museum until Jan. 9, adored by the same visitors who observed Jennifer’s piece. Before LeWitt graduated from Syracuse University, he was a New Britain native. It’s because of this that he donated a lot of his artwork to the NBMAA.

According to museum docents, the museum has the most extensive collection of his work on the planet, not to mention the most comprehensive. The NBMAA has prints, etchings, and paintings from LeWitt’s entire life: from his later, more abstract images, to his first oil landscapes.

As I left the Museum, I passed a statue of Don Quixote by Nathaniel Kraz. He was scrawny and tall—like he had been stretched on a cartoon torture device. Yet, despite the contorted and strained angles of his figure, his face seemed relaxed—proud even. He held a curved sword and an indistinguishable symbol on his head-sized shield. His tiny heart was visible as it beat within his chest.

Looking at it made me ask many internal questions on tour—but only one remained with me as I left. I wondered, what would happen if we all lived this way? With our heart puffed out on our chest—willing our art into a reality of our own making? I suppose, eventually, that someone might just notice…