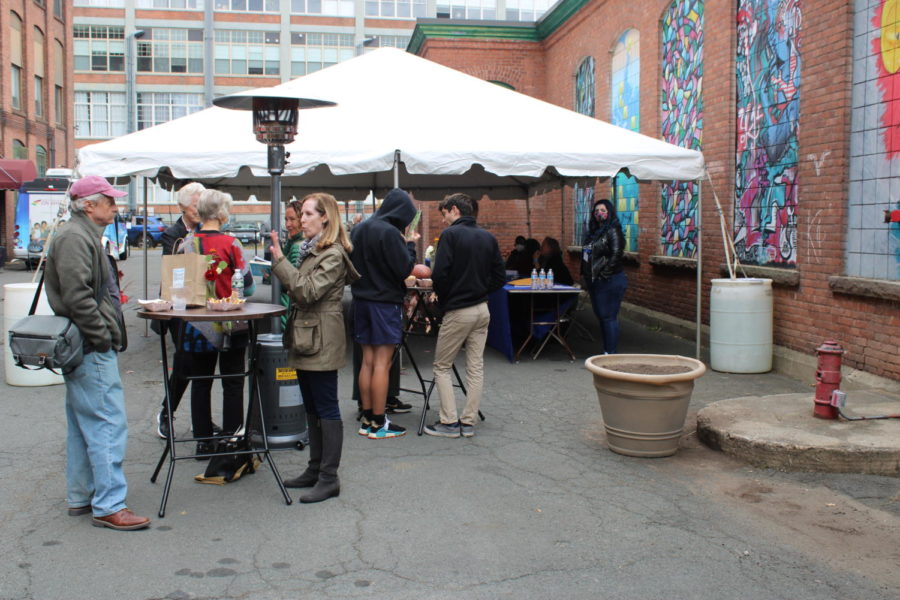 Finally, after 24 months, reading and writing have returned to Connecticut at the Annual Literary Festival, revitalizing the community-grown outreach of readers, writers, professors, students, professionals, and beginners looking into literacy in time for autumn spirits.

The event made sure to mind Coronavirus guidelines, requiring each guest to either show a COVID-19 vaccination card or proof of a negative COVID-19 test. In addition, masks were required indoors at all times.

The event featured four main stage theatre talks with authors that took place throughout the day. One of the Theatre Talks featured Elizabeth Hinton, an African American studies and law professor at Yale University. Hinton discussed her book “America on Fire: The Untold History of Police Violence and Black Rebellion since the 1960s” with Trey Ellis. Her book, published earlier this year, takes people through some of the neglected stories of racial inequality of the 20th century, leading to the wake of the George Floyd murder protests in the spring of 2020.

“It was really difficult for many people to want to take these incidents seriously as political moments,” Hinton said.

The Yale professor spoke on how peaceful protests turned violent during MLK’s assassination, which she noted were akin to the responses of the protests this decade. According to Hinton, “We’re still living in the aftershocks of [these instances] today.”

Theatre Talks featured Central Connecticut State University Professor Aimee Pozorski, who talked with Mark Oppenheimer and his book “Squirrel Hill: The Tree of Life Synagogue Shooting and the Soul of a Neighborhood.” His book explored themes of approximation and how trauma resides in impacted communities. Oppenheimer’s capturing of the reformative years of a neighborhood and its tight-knit community engages with the spiritual and historic aspects exclusive to Squirrel Hill while also ushering the power of proximity post-tragedy.

Six writer panels occurred during the festival, one of which was “What’s Real May Not Be: Fact, Fiction, and Cross-Genre Play.” Panelists Molly Gaudry, Marcos Gonzalez, and Charles Coe read snippets of their memoirs and explored the ideas of life, heart, and truth in recollecting the past.

Gonzalez spoke through his piece about meeting his mother through old photographs, her youthful beliefs perhaps more open to the concept of her son’s sexuality.

“She’s a woman I didn’t know, but If I did know, maybe that idea is a good impression of her – She might’ve been this woman who was so open to difference,” Gonzalez said.

In between the panels and discussions were presentations by writers and musicians in the RAW Cafe. Natasha Gambrell gave her all in her poetry reading, which restlessly honed on Connecticut politicians’ details of indigenous injustices. She referenced the Eastern Pequot’s petition for federal recognition in 1979, which was discarded after 2005.

She was only 13 at the time. Since then, Gambrel continues to remind people of the past legacy and its erasure that she represents.

After each presentation, patrons were able to meet authors and writers outside for book signings and chat. The courtyard was also home to Val’s Vittles, a food truck offering sandwiches, mac and cheese, and various food items. Locals said that the food was “a delight.”

Inside the event was an interactive type-writer gallery, which allowed guests to create their physical documents, just as was done many years ago when the room inside the venue was specialized for typewriters.

The event hosted many stories transcending the page, and people are anticipating even more stories in its arrival next year.