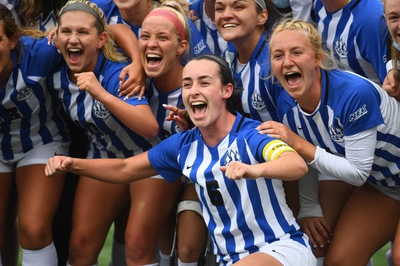 The Blue Devils will face South Florida in the first round of the NCAA Tournament.

The Blue Devils finish the shorted season 7-0, making it the third straight season that CCSU kept a perfect record on their home field (23-0-2 from 2018).

The first 30 minutes of the match were deadlocked, typical of a final in which psychological aspects of the game mix: the desire to win and the fear of losing. Central set out to play the traditional soccer they are accustomed to: moving the ball horizontally and vertically, relentless movement in attack, making use of their one-on-one abilities and a strong pressing on defense. The Blue Devils were met with a conservative LIU defense that opted to present continuous resistance to Central attack by congesting the center of the field and by sitting back on defense and closing possible spaces impeding Central to permeate attack.

The deadlock was broken at the 31st minute after two-time NEC Midfielder of the Year and Championship MVP Roma McLaughlin sent a corner into the box which was seen deflected from an LIU defender and as a result ended up in the back of the net. The tightly fought first half finished 1-0, however the second half would see a complete dominance from the Blue Devils. “The longer the game stayed at 0-0 or 1-0, LIU still had chances to win, but as soon as we got the second goal it was game over,” D’Arcy said after the game.

NEC Freshman of the Year Kelly Brady scored off a header for the second goal of the final after a cross was fed into the box from NEC Attacker of the Year Jenna Rae Covello. The third goal again came off a header, this time from Taylor Smith who had just recently been subbed on. Having it be more than obvious that the NEC Championship would be theirs, Central would not renounce attack and would score the final goal of the match in the 85th minute; this time it would come from freshman Gia Edwards. It marked the first goal of her collegiate career.

Central’s reproduced success this season saw important involvement from players of all class years; the most influential being the junior class with eight goals scored out of the 19 total and five assists. The freshman recruits managed to fluently adapt to the squad and would also provide very important numbers with seven goals scored (two in the final) and four assists. “It’s a balanced team, all classes are well represented. The goals come from all places and it’s nice to not be over reliant on one person” D’Arcy said.

This season, not just for soccer, but for all sports, was irregular and unlike any other due to the COVID-19 pandemic which put a halt on all sporting competitions. The first post-COVID season was one fraught with imponderables. This season saw many games get postponed and cancelled due to positive COVID cases which led to some teams dispute unequal amounts of regular season games in comparison to others. As a result, this caused a very tight calendar which made the NEC adjust the postseason conference finals and implement a single-game postseason. Despite playing a season like none other, the Blue Devils under Mick D’Arcy finished it like the last two: champions.

CCSU Captain Roma McLaughlin expressed her joy of victory and also expressed her delight that her movement advocating for the return of college soccer had succeeded. “We’re so glad to get some games in, and to win it is even better,” Roma said to CCSU Blue Devils YouTube. “I have to give a shout out to the other teams who made the return happen. I got together all the captains at the start and we all wanted the same thing: to play soccer.”

The next objective for the Blue Devils and Coach D’Arcy is the NCAA College Cup in North Carolina where they will face the University of South Florida, champion of the American Athletic Conference, on April 27.

Projecting the upcoming fall season, the Blue Devils look to conquer their fourth consecutive title in a row, a milestone previously achieved in the seasons 2002, 2003, 2004 and 2005 under the coaching of D’Arcy. “The talk of now is going for four,” D’Arcy closed.