Baseball Picks Up Two Against SHU 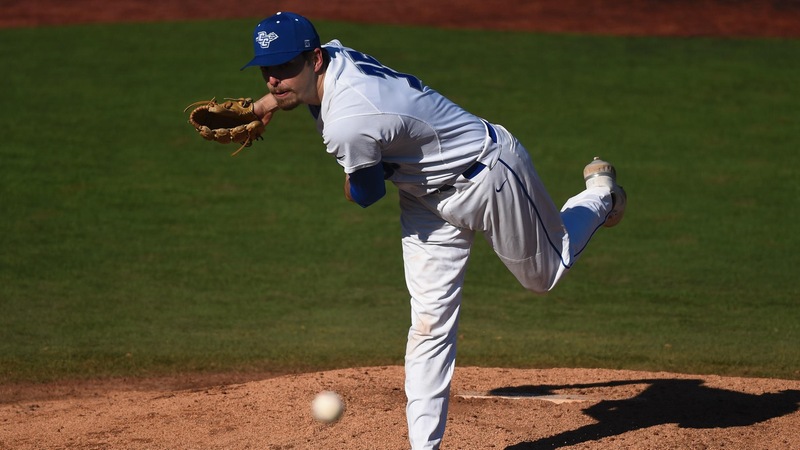 Braun (above) has a 0.95 ERA through his first two starts.

Central Connecticut baseball kicked off the conference part of its schedule with two wins over Sacred Heart. Senior pitcher Andrew Braun shut out the Pioneers in the Blue Devils’ conference opener.

Braun did not walk a single batter in his start and struck out 10 along the way. He also had six separate three up, three down innings including two in which he struck out the side. In his 19 innings of work this season, the senior is boasting a 0.95 earned run average (ERA).

While Braun was able to keep the Pioneers off the scoreboard, Sacred Heart’s pitching did not have the same luck against CCSU’s bats.

The Blue Devils did not light things up with the long ball as they had in some previous games this season. In fact, of the 13 hits CCSU collected, 11 of them were singles and the only two that weren’t were doubles. CCSU was able to take advantage of a passed ball and a wild pitch to tack on two, but the rest of the runs came the old fashioned way: RBI singles. The first game concluded with a 6-0 score.

Sacred Heart was able to get on the board in Saturday’s match, but again never led in the game. Dave Matthews started things off for CCSU with an RBI single in the first inning. With the bases loaded in the third, Buddy Dewaine and Jack Nolan each drove home a run of their own before Noah Martinez crossed the plate on a wild pitch. Before the third inning was over, CCSU was firmly in the driver’s seat with a 4-0 lead. Sacred Heart was able to squeak two runs across in the fourth and fifth, but it was too little, too late for the Pioneers, who fell 4-2.

The Blue Devil offense, which had been steamrolling teams through the early part of this season, was shut down in the series finale with Sacred Heart. The team scored a season low two runs in the outing and were only able to land six hits off Sacred Heart’s Chase Jeter.

While the offense was held out of this one, the pitching still impressed. According the CCSU Athletics, the Blue Devils only walked three batters over the 27 inning weekend series.

The Blue Devils leave its opening series with a 2-1 record in the Northeast Conference, currently tied for second in the standings.

CCSU baseball will be back against a conference opponent this weekend when it takes on Fairleigh Dickinson.