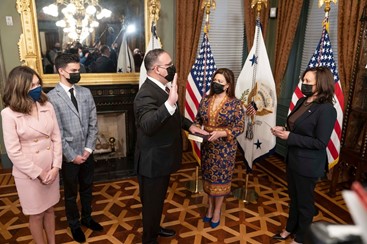 Following his nomination, Cardona appeared in front of the U.S. Senate Committee on Health, Education, Labor and Pensions, who voted 17-3 to advance his nomination.

The Senate vote confirmed his appointment to Biden’s cabinet 64-33.
In an email to the CCSU community, President Dr. Zulma R. Toro shared her excitement just moments after Cardona was confirmed.

“Politics aside, I think we can all agree that Dr. Cardona’s successful nomination marks a wonderful moment in CCSU history,” Toro said.

Cardona has served in the education sector for his entire career. He began as a fourth-grade teacher at Israel Putnam Elementary School in Meriden, Connecticut.

He then held positions in different school districts, including being principal at Hanover Elementary School and Assistant Superintendent in Meriden. Cardona also taught at the University of Connecticut as an adjunct professor. In August 2019, Connecticut Governor Ned Lamont appointed Cardona as the Connecticut Commissioner of Education.

Throughout his education and career, Cardona has focused on studying the gaps between English language learners and their classmates.

Cardona grew up speaking Spanish and struggled to learn English while in kindergarten. He will be the second-ever Latino U.S Secretary of Education.

“As the first Latina president of this university, it is particularly exciting to see Dr. Cardona forge new paths in education for the Latino community and all Americans,” Toro said.

“I think his selection is a great moment in the expansion of diversity, representation and inclusion in government,” Dr. Foster- Brown said.

At the press conference in which Biden announced his nomination, he praised Cardona and other American educators for their commitment to teaching future generations of Americans, emphasizing that teachers have one of the most critical jobs in the world.

“Once again, during this pandemic, we’ve seen who our educators really are,” Biden said. “They’re selfless, they’re dedicated, they’re cut from a true cloth of character and commitment.”

“In this critical moment of our nation’s history, it is essential that there is an educator serving as Secretary of Education,” Biden said. “I want to make that clear again, someone who has taught in the classroom.”

Cardona is expected to bring a fresh perspective into the office, drawing from his experience in the education field.

“It is always a good thing for policymakers to have the lived experiences that help their decision-making. It is not always necessary but it could certainly be of some benefit,” Dr. Foster- Brown said.

Cardona assumes his new position during an unprecedented period of American history. As the COVID-19 pandemic continues to complicate classroom plans, the Centers for Disease Control and Prevention has recently encouraged a return to in-person learning before the end of the school year.

Cardona has expressed his support for Biden’s plan to bring schools back full-time.

“There is no substitute for a classroom experience for our students,” Cardona said at his confirmation hearing on Wednesday, February 3.

To keep up with the former Blue Devil during his time as the Secretary of Education, Cardona can be followed on Twitter at @SecCardona.