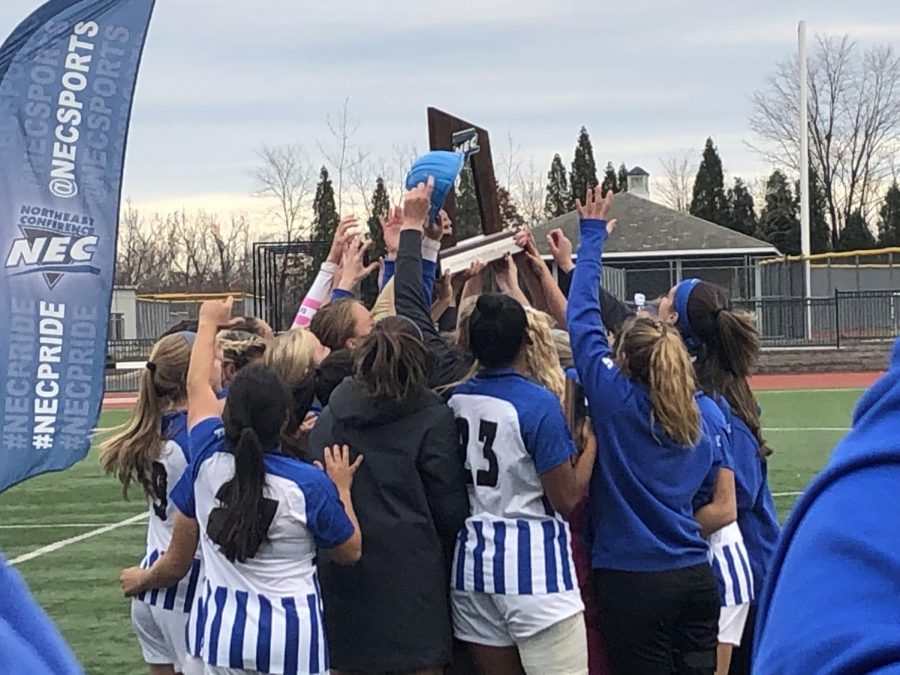 The Blue Devils will be looking for a three peat after taking home the previous two NEC Titles.

The world is slowly going back to normal as we approach the one-year anniversary of the start of pandemic. The sports world is just the same, most leagues have begun playing games again. Central Connecticut women’s soccer is one of these teams. It has been 15 months since they last played a competitive game.

Head coach Mick D’Arcy is happy that his team is going to be on the pitch doing what they love.

“We’ve been doing a lot of things,” D’Arcy said. “A lot of Zoom calls, training in groups of four, to training indoors over the winter. The last piece of the puzzle is to go out there and play an 11 on 11 game.”

“I think everyone is excited just for that. We’re all involved in the game because we love to compete and that’s soccer in its purest form when you can play a full game,” he said.

The team comes into this season as winners of the last two Northeast Conference Championships and they are favorites to win it all again. Polling is mostly based off of last season’s performance.The team is completely different from the one that won it all a year ago but the culture that D’Arcy has created means that the team will still have the hunger and desire to win.

“I think when you come to CCSU there is an expectation and a standard that we’re trying to reach all the time. That is the history and tradition of the program, that at the end of the year we’re going to be up there competing for a championship.”

The team was scheduled to play on 2 March but a positive case on the opposing team, Bryant, meant the game had to be postponed, meaning the Blue Devils will have to wait another week before their season can get underway.

With so much uncertainty surrounding when matches will be played, D’Arcy says that this might be an even shorter season than was once thought.

“We’re hoping it is postponed and not cancelled,” D’Arcy said. “There are some gaps where we could play the game. From a soccer point of view we want to play but from an administrative point of view we’ll have to get permission.”

Due to the shortened season, each game holds much more value to the players and coaches. However, D’Arcy thinks that because of all the uncertainty, it is hard to know how the season is going to play out.

“One of the things with this season is that there are a lot of things outside our control. On any given day you could get a call that half your team is going into quarantine because of contact tracing,” D’Arcy said.

“There is no doubt in my mind that there is going to be games over the course of the year where we will not be at full strength because of COVID-19. With that in mind, it is hard to put emphasis on each game or even the season as a whole.”

At any level of sport, fans are an important aspect of the game. At the collegiate level particularly, families are a crucial part of the fanbase. With fans not being able to watch the games in person, the team decided to stream all its matches on Facebook.

Not all the games are streamed during a normal season, meaning that you must be at the stadium to watch the action. By streaming the matches on Facebook, it means that no matter where they are in the world, fans can watch.

The team comes into this season with one of the deepest squads they have had in years. Over the winter they were able to play inter squad games with teams of 11.

The team is led by All-American Roma McLaughlin. The games being live streamed is particularly relevant for McLaughlin, who is from Ireland.

“It is nice because it means my family back home can watch,” McLaughlin said.

“It is gonna be a lot different,” Mclaughlin added. “Warming up and seeing friends and family creates an excitement and a build-up so it is not gonna be the same.”

Despite the All-American tag, McLaughlin is just happy to finally be playing soccer again after such a lengthy break.

“After achieving All-American you’re always gonna put that little bit more pressure on yourself to do better. Then again, I’m just so grateful that we’re going to be playing again. It has been over a year and a half, that is a long time to go without soccer.”

With so much uncertainty going on, one thing is for certain. CCSU women’s soccer is back, well kind of.