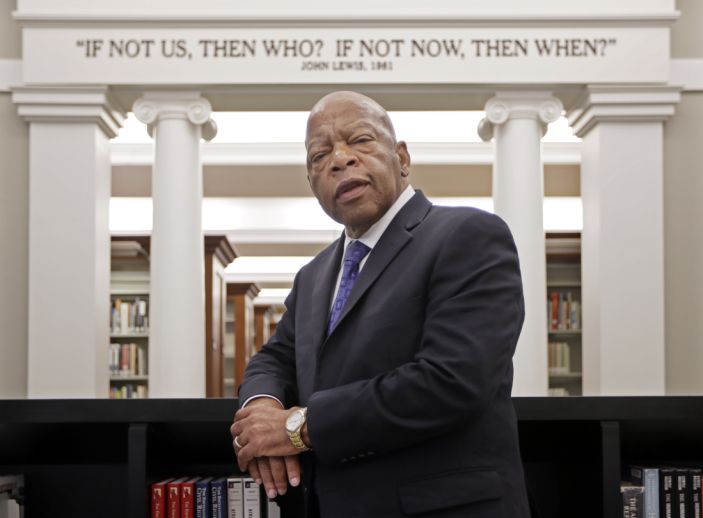 Rep. John Lewis, D-Ga., poses for a photograph under a quote of his that is displayed in the Civil Rights Room in the Nashville Public Library Friday, Nov. 18, 2016, in Nashville, Tenn. Lewis will be honored this weekend in Nashville, where the civil rights leader once organized sit-ins at the city's segregated lunch counters. Lewis is being recognized with the Nashville Public Library Literary Award. (AP Photo/Mark Humphrey)

Central honored civil rights icon John Lewis by opening the “John Lewis Institute for Social Justice” which will act as a gateway for CCSU students to become informed and involved in public affairs.

“An important component of CCSU’s mission is to prepare students to be thoughtful, responsible, and successful citizens,” President Dr. Zulma R. Toro said in a recorded statement. “Many of our students have expressed a desire to become more informed and involved in social justice initiatives, especially after the killings of George Floyd and Breonna Taylor.”

According to the Center for Information & Research on Civic Learning and Engagement, young people were the group most likely to say that racism is a serious problem in the United States, and three-fourths of youth said that they believe that the criminal justice system in America needs an overhaul or major changes.

“Following the death of John Lewis, I asked faculty and administrators to create a program that would honor his legacy, to identify educational experiences and opportunities that will inspire our students to not only identity inequality, but foster a deeper understanding of its roots,” Toro said. “The John Lewis Institute for Social Justice hopes to develop students who become advocates and leaders who pursue careers in public service or become inspired to stand up and get involved.”

The short video of the institutes opening on Feb. 25 then shifted the conversation to the man behind it, and the contributions Lewis made in healing and cleansing the soul of America.

Lewis was born on Feb. 21, 1940, to sharecroppers outside of Troy, Alabama. He attended the Historically black college and university (HBCU) Fisk University in Tennessee where he attained a bachelor’s degree in religion and philosophy.

In 1961, at just 21-years-old, Lewis participated in the famed “freedom rides” in the south, with segregated interstate busing terminals. A few years later, Mr. Lewis  would become the Chairman for the Student Non-Violent Coordinating Committee, which stated sit-ins and other activities that would push the nation into a greater understanding of the plight of Black Americans.

“I’m so proud that you’re starting up the John Lewis Institute for Social Justice,” Governor Ned Lamont said in the video. “He was a fighter for social justice, and I’m glad he’s going to inspire generations of CCSU students to get involved in your community, help those most in need, fighting for economic and racial justice near and far.”

Representative John Larson, a CCSU alum and colleague of Lewis, also weighed in.

“[John] embodied the teachings of Dr. King, and lived them through the movements and peaceful protests for human rights and racial equality which he nobly led,” Larson said. “I’m incredibly proud of my alma mater for establishing this institute in honor of John Lewis to both inspire and prepare a new generation of leaders. John Lewis was a humble man, who got in the way and caused good trouble.”

Later in his life it was imperative for Lewis to reach out to younger generations, urging them to get involved and informed. In a Vermont Public Radio (VPR) Interview two years ago, Lewis shared his optimism that the next generation of America will boldly tackle the issues of social equality.

“The young people will be our salvation,” Lewis told VPR. “The young people will save our country, save democracy, save the Constitution, and help make this little piece of real estate we call America better for all of us, and maybe inspire people around the world to stand up, to be brave, bold and courageous.”

For more information regarding the John Lewis Institute for Social Justice visit https://www.ccsu.edu/johnlewisinstitute/story.html