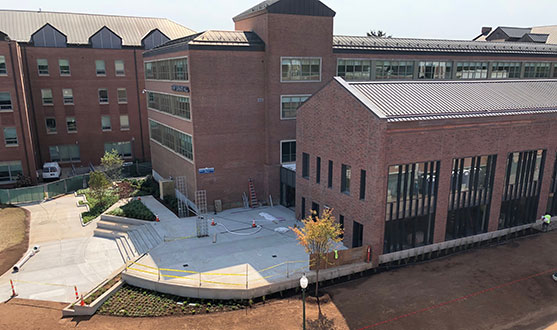 The $25 million dollar renovation and additions to Barnard Hall will be complete by summer 2021.

Despite setbacks due to the coronavirus, Central Connecticut is expected to have three multi-million dollar projects complete and readily available for the campus community by the end of 2021. These projects include a state-of-the-art academic building, parking garage, and new, modern renovations.

These projects are a part of CCSU’s master development plan, which has included several popular CCSU additions such as Ebenezer D. Bassett Hall, Hilltop Cafe, Mid-Campus Residence Hall, and more.

The $62 million academic building will become home to CCSU’s three engineering departments. The four-tier structure will include seven classrooms, 47 offices, 12 laboratories and a large lecture hall.

Director of Engineering Services, James Grupp, said in an interview, that the academic building will include several features important to the engineering departments and students utilizing the space.

“One of the things that we learned, in the years I’ve worked here, is trying to make it student-friendly. That’s one of the things we tried [to do], especially in the engineering building. There’s student study spaces, student support services, things like that. Areas that students can hang, similar to what’s in Willard-DiLoreto and Bassett Hall,” Grupp said.

Students will also have access to laboratories equipped with high-end tools that are actively used in various engineering fields.

“There’s even a concrete lab, where they can break beams and build concrete. In addition that, there’s the Innovation Design Center, which is a 3-D modeling of potential manufacturing centers,” Grupp said. “We’re working on some grants to get that in there. It’s going to be a little high-tech in that building, probably the most high-tech we’ll have on campus when it’s all said and done.”

Though the initial completion date of the project was March 2021, university officials estimate classes will be able to move into the building this summer.

Faculty and students can also expect to see more parking this year as construction for a new garage is underway.

The Willard-DiLoreto parking garage will hold up to 600 more parking spaces and will be located towards the southwest end of Paul J. Manafort Drive. The $25 million addition will connect to the newly renovated Willard-DiLoreto academic complex through an aerial walkway above the busy street.

Campus Architect, Henry Altman, said in an interview that he believes the new garage will become a “gateway” to those coming to CCSU, specifically prospective students making their way onto campus. This is largely due to the garage’s features and appearances.

According to Altman, the interior structure will be that of a traditional parking garage, but the exterior design will mirror the campus’s academic buildings, with brick casing, glass designs, and even WiFi available throughout the structure.

“At the end of the day, it’s a parking garage but what we’re trying to do is serve the campus community better,” Altman emphasized. “We’ve also looked at campus safety and how to keep students safe: making the stairwells open and visible and bright. Same thing with the bridge, [making] it very glassy so that people can see and be seen and just make it a friendly environment for everyone that uses the building and make it a part of the campus community.”

The $25 million renovation and additions to Barnard Hall are nearing completion this year as well. The university’s website states that CCSU’s School of Education and Professional Studies will be moving into the building this summer, gaining access to modern renovations and an estimated 9,500 gross square foot addition.

The campus will be expected to undergo more changes next year as the plan continues to move forward. The next highly anticipated project will be renovations and additions to Elihu Burritt Library, which is said to begin in winter 2021.