A Pandemic Abroad: Heijningen Talks Volleyball in World of COVID-19 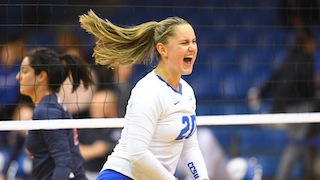 The COVID-19 pandemic has kept us all close to home for what feels like an eternity. Eline Van Heijningen, however, is far away from her home in the Netherlands, playing on a court in America.

Heijningen joined the rest of her Central Connecticut volleyball teammates in quarantine dorms on campus this past August. For the six other players quarantining together, their lives were not much different than their ones at home. Heijningen, however, would have to learn the norms of an America that has been ravaged by the pandemic, an America different than the one she left in March when CCSU was first shut down.

“In the Netherlands we were doing pretty well, we didn’t really have to wear any face masks except for public transportation,” Heijningen explained, “so it was quite the transition when I first got here.”

The Netherlands that Heijningen left was living in a different world than the one she would come to see in America. After an initial spike in cases in the spring, the Netherlands had been mostly quiet on new cases up to her August departure. Since then the country has faced a new spike in cases, however.

Heijningen kept herself up to date on the happenings in America through the news when she was home this summer. The decision to come back to CCSU knowing there would not be any games played this fall was a tough one, but Heijningen is focused on getting back to 100% after an ACL tear prematurely ended her season last year.

“I considered maybe not going until I heard how well CCSU was planning things,” Heijningen said. “For me it was an easy decision to come here because I would be working with the trainers, I was itching to get back on the court since November. I knew it was a little bit of a risk but I knew everything was planned well.”

Volleyball was the first team at CCSU to begin practicing in small pods. Because there are only 14 players on roster, they will soon start full team practices. Heijningen and the rest of the team are more than willing to sacrifice normalcy for safety in these early weeks.

“Obviously it’s very different,” Heijningen said. “We all went to get on the court and scrimmage together as a team but I do feel like it’s the smarter and safer option right now.”

The camaraderie and energy that comes from being with the whole team is what has been missed most for Heijningen.

Heijningen will be taking the extra year of eligibility granted by the NCAA due to the pandemic and said it was a “no brainer” for her after she missed last season.

The future is uncertain for volleyball, but playing games in the spring is a real possibility for the team along with other spring sports.

“I just want to get my body and mindset back on playing,” Heijningen said. “After a big injury like that your mindset is just a little bit different from before.”