Normal Is An Ideal, Not A Reality 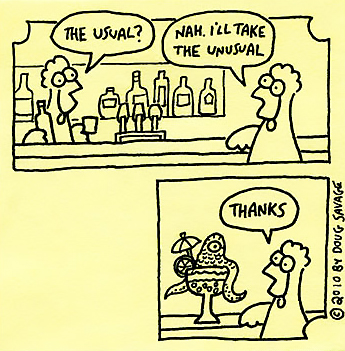 The unusual is also good. Source:

“Why can’t you be normal?” asked a classmate in elementary school when I refused to join her in playing with dolls. I thought nothing of it at the moment, but it always stuck with me.

Maybe it is because only-children tend to be peculiar —and I am one — or because I cannot stand dresses nor skirts or perhaps the fact that I hate peanut butter. Oh, I know: I am not normal because I did not dream about a handsome and courageous blue-eyed prince waking me up with a kiss and, of course, every little girl desires this.

Can we define normal? Can we divide things into “normal” and “not normal”? Can we judge people for not being or acting as our “normal” but as theirs?

Seriously, I am worried. It is not because of what that small girl said, but how the whole world uses and understands the word normal. The roots of this word prove that people have defined it about the same way since the very beginning. In 1500, it was defined as “typical, common,” in 1640 as “standing at a right angle,” “made according to a carpenter’s square,” “rule, pattern,” and in 1828 as “conforming to common standards, usual.”

Years have passed and no one is still aware of how wrong we are, of how much it affects someone personally and of how much it divides the community. We continue to relate the word normal to usual, habitual, standard, unexceptional and popular. Basically, we have always based normal on a mere statistical nicety: what we see all the time, what we see the most.

The worst part is that, unconsciously, we associate meanings to this word.

For society, normal also means correct; in other words, being called not normal or weird is considered bad and incorrect and that panics us. We associate it with being unaccepted and disapproving, the most feared things on earth. People refuse to feel marginalized or different, so they stop being how they really are to fit in this “what-we-see-the-most” standard.

Once we have made sure we are and act like the normal club, we undervalue and criticize the weird one. And the cycle starts again.

In reality, we resist being labeled as odd because we are terrified of isolation, but we are the ones who are really causing it.

The world has hugely evolved in many fields, but we still have a closed mind in some aspects of life. It is still seen as abnormal for boys to wear dresses or for girls to be strong. People still stare when they notice same-sex couples or witness three people in love together. It raises eyebrows when one notices for a man to wear long acrylic nails and for a woman to dye her hair pink.

Even things like not going to college are still seen as abnormal, when in actuality attending a higher education institution is not meant for everyone.

Things become odd because a majority of the population does not follow such trends but in the end, we are all humans with bodies and feelings. I guess society is still working to understand that and the “minority” will never be labeled as normal because they don’t follow the popular opinion.

To quote the powerful words of Nicki Minaj, “maybe your weird is my normal. Who’s to say?”

Who’s to judge what is normal and what is not? So yes, people can call me weird. Weird is good. Weird means normal and normal means weird. A thing can be normal and weird at the same time; it always depends on the person. One day we need to be aware and proud of our differences, because they are actually our normalities. Normal is an ideal, but not reality.