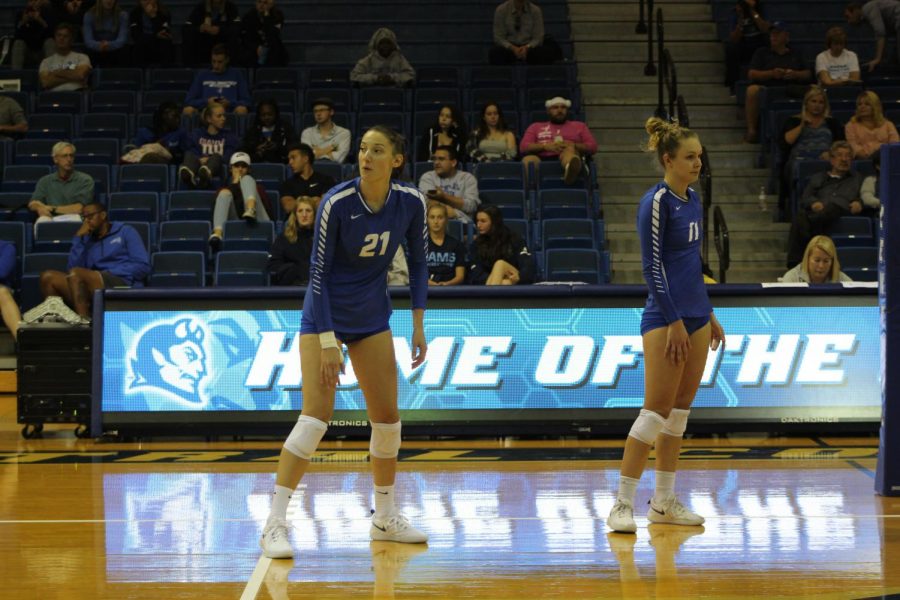 The Blue Devils started their weekend at home, facing a Merrimack team they swept in an Oct. 4 matchup.

Merrimack was unable to get anything going against the Blue Devils. In the first two sets, CCSU held the Warriors to negative hitting percentages. Merrimack’s third set wasn’t much better, hitting .000 to make for a -.024 average on the day.

“We wanted to set the tone for the match tonight and wanted to play at our pace,” head coach Linda Sagnelli said. “I think that’s exactly what we did.”

Merrimack had a better poker hand than volleyball score in the first two sets, scoring a pair of nines in the losses.

Junior Emma Henderson earned a double-double for her efforts on the day, finishing with 10 kills and 10 digs. This is the outside hitter’s 10th double-double of the season.

The entire Blue Devil squad contributed in the victory, with all 15 players getting a share of the playing time against Merrimack.

Sagnelli said she was happy to get everyone onto the floor, specifically giving a nod to the play of freshman Mackenzie Anderson. The third set was only the second time Anderson had played in a conference game, as she served on a run of six straight CCSU points.

“Her handling on the ball was great,” Sagnelli said. “The first serve was a little off, so it was good that she went on a serving run. She kind of grew into that, then every serve got more and more aggressive.”

After the return of Eline van Heijnin and Gala Galabova from injury, the complete team of 15 looks to be a competitive one in the NEC. While Sagnelli was quick to knock on the hardwood court at the thought of a fully healthy roster, she acknowledges the past injuries and even accredits them to some of the team’s strength’s this year.

“We have players that are really starting to grow together as the season has gone on,” Sagnelli said. “I think some of the tough losses have actually taught us more about ourselves than anything else.”

The depth on the team leaves Sagnelli with a good problem to have: who to start?

“We have a big match tomorrow, and I can’t tell you the starting lineup for it yet,” Sagnelli said. “Some players are so close that it may come down to a match up or it may come down to a skill. Each player has their own skillset that they bring to the team. I always say ‘collectively all those talents is what makes the team,’ when we put it all together.”

The Blue Devils were back on the road Saturday, taking on St. Francis Brooklyn in an environment that Henderson and Sagnelli alike acknowledged was tough to play in.

The teams traded leads in the first and sat tied late at 23. The Terriers were able to snap off a run of three by forcing consecutive CCSU errors, taking the first set.

The Blue Devils did not allow for such a comeback through the remainder of the game. SF-NY did not break 20 through the final three sets, finishing with a .140 hitting percentage.

With CCSU’s two wins and a loss from LIU, the Blue Devils are now in sole possession of the fourth seed in the NEC standings. Sagnelli said the final two weeks of the regular season are “going to be a fight.”

“Every outcome of every game is going to be really important,” Sagnelli said. “We have to take care of business and we can’t lose, but that’s true for every team. We’re all in the same boat and it’s all gonna come down to possibly the last few games of the season.”

Sagnelli and the Blue Devils are ready for the challenge, she said.

“It’s going to be exciting volleyball, every single point matters.”