A Red Flag Can Be A Life Saver 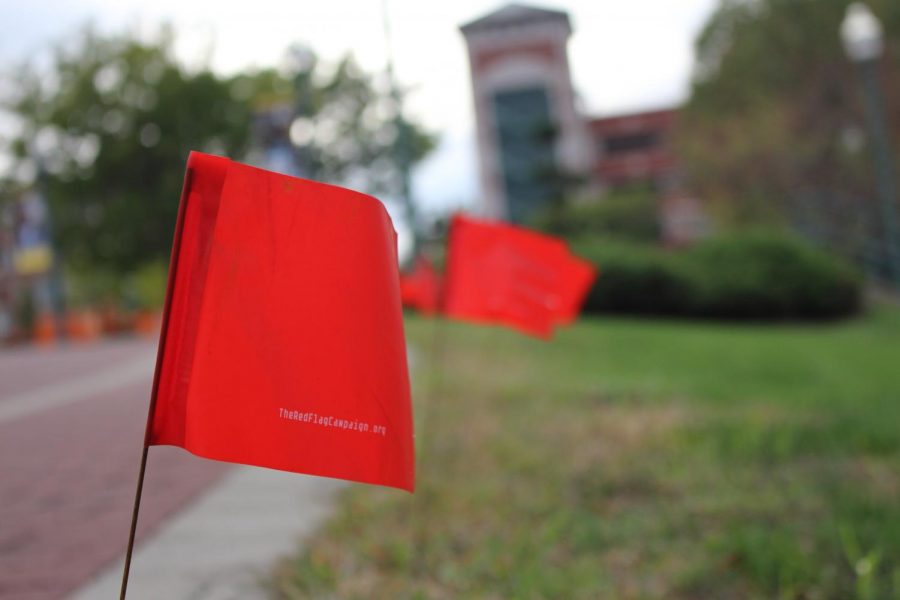 The red flags are meant to raise awareness to dating violence and prevention.

A little red flag standing alone may appear to be nothing, but when there are a dozen lined up blowing aimlessly in the wind they are begging to be acknowledged and for good reasons. These symbolic red flags are typically what one thinks of as small warnings before a bad situation occurs.

However, the real ones scattered across the Central Connecticut campus are intended to be a reminder to become aware of some potential dangers in relationships. For weeks, they have stood tall around campus to get students more aware and push to ask questions on Red Flag Day.

For many years, CCSU has been a part of the Red Flag Campaign, a nationwide awareness campaign that addresses dating violence and promotes prevention of dating violence on college campuses — as they are the most common place of occurrence.

“What a a lot of people don’t realize is college students are actually the most vulnerable to dating violence,” Julie Dewitt, a participant in the campaign, stated. “We’ve definitely had a lot of students come through and say they appreciate the work we are doing and they didn’t realize certain things could be dangerous or unhealthy behaviors in relationships.”

Through a number of strategies, the university encourages people to speak up when they witness “red flags.” Some warning signs of dating violence, according to the Red Flag Campaign, include hostility, dishonesty, dependence, intimidation, physical and/or sexual abuse and intimidation.

Through “bystander intervention” dating violence can be stopped quickly stopped in its tracks. Some steps include speaking up and becoming  aware that the situation is not okay, stepping in to de-escalate the situation and addressing the matter with the victim and/or the abuser later to safely talk and gather resources who specialize in helping those who are experiencing dating violence.

“It’s a common misconception that when victims are being abused they can just leave. The common question people ask is ‘why doesn’t she just leave? It doesn’t make sense.’ But there’s actually a number of reasons why a victim can’t leave,” Dewitt said. “It’s important to realize these people need help and it’s not always as easy as it seems.”

Several organizations and clubs on campus also partook in generating healthy dating habits throughout the month, as October is known as National Domestic Violence Awareness month. Some of which including the Ruthe Boyea Women’s Center, ResLife office and other organizations throughout campus.

As the event came to end in October, members of the Central Connecticut community are encouraged to continue to promote healthy dating relationships and to help those that are in need.