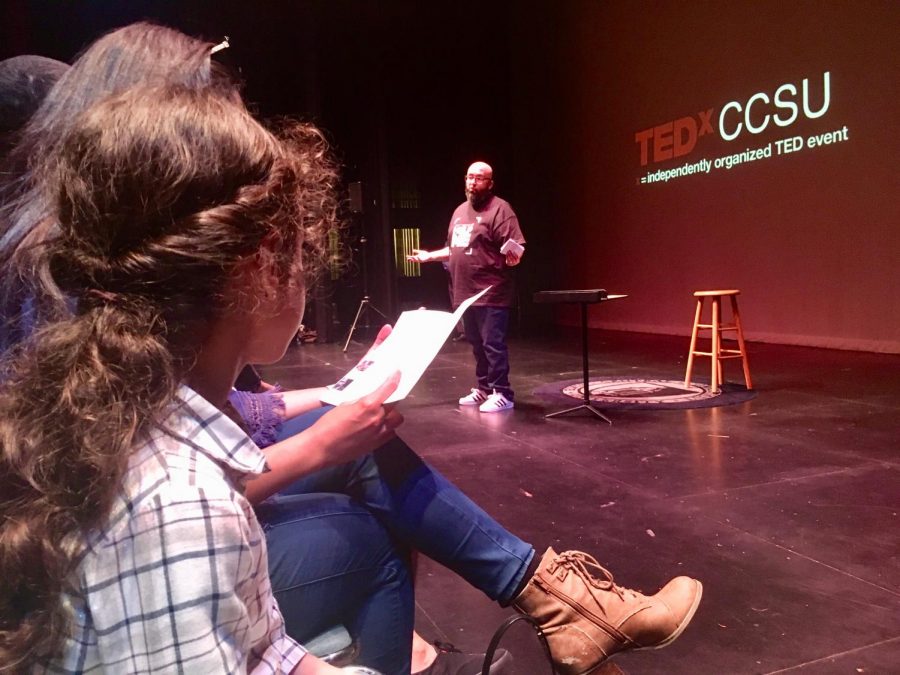 Chasing dreams could be considered a cliché at inspirational talks, but the speakers at last Tuesday’s TEDxCCSU all carried the theme with the intention to make the audience see things differently than when they first sat down to listen.

For opening speaker Barry Lane, his dream is to “weave a force field for good.” Breaking out a guitar, Lane delighted those in attendance with the songs he plays for children when he visits schools around the country, each melody carrying a message of love and kindness.

“The older you get, the more apt you are to think about being cool,” Lane said. He’d just asked the audience to fold their arms across their chests and to scrunch their faces – something he also asks of the kids he performs for. “When I go up the grades, I try to teach kids that you can be kind and cool.”

Lane’s talk was the dose of sweetness the audience needed to face the harsh reality follow-up speaker Luis Torres placed in front of them. A principal from the Bronx, Torres outlined his vision of every student being able to maximize their full potential in school, recalling his own experience of his guidance counselor not recognizing his artistry and telling him to join the military because “if I went into college, I would probably drop out.” He wanted to prove her wrong.

“I went into education because I wanted to make sure that every child that I touch didn’t have to go through what I went through,” Torres, who is now a disabled veteran with four college degrees, said.

His daughter, a “talented artist,” went through the same experience even if he prepared her, he added, because “everything was stacked up against her” based on the admission statistics of the state college that denied her.

“For the rest of my life, I will fight for equity,” Torres said. He emphasized that equity can start with making sure every school has a well-funded arts program. “If each [New York] business just donated $850 to fund arts programs in schools, we’d be able to do this and that way every single school would have access to the arts. Then we start to level the playing field.”

Central Connecticut’s own Dr. Cassandra York, an assistant professor of physical education and human performance, spoke next, detailing how she went from drugs and stealing as a teen to holding a doctorate in exercise science and nutrition, becoming a registered dietician, owning a gym and teaching at the university.

“I want people to know that they should never stop dreaming and never stop reaching for goals that they want because we all can achieve anything that we want. This is our world. Everyone else is just in it,” York said. Her next goal is winning CCSU’s Excellence in Teaching award.

Sixteen-year-old Vishnu Murali then took the stage to talk about how yoga quite literally saved him from a skin condition that more than 100 different pills could not cure. He “laughed” in his parents’ faces, he said, when they suggested he try it along with healthy eating, but he did it anyway out of guilt for dragging them to the doctors’ and out of hope that something would change.

“In just six months, I took care of something that I had for 18 months,” Murali stated, citing his determination for a clearer future of not having to leave school to do blood work or sacrifice his weekend plans to see his pediatrician. “I wanted to get rid of this.”

Marcel Bonnici’s talk came next. The CCSU student, who is headed to Northwestern University to master in robotics, has over 600,000 subscribers on YouTube and got his start with a viral video of him building a functional claw machine out of Legos. His success, he said, can be attributed to his parents saying “no” when he wanted to spend money on a regular claw machine as a kid.

“Slap a tight lid on them when you know your child can DIY an alternative. When you gently box them in, they’ll have a reason to think outside of it,” Bonnici said.

Ensemble Nzinga’s Daughters closed the event with songs of the Underground Railroad, codes in the lyrics leading runaway slaves to the freedom they dreamed of and deserved.

“These songs to you are known as spirituals, but to us, they are our sacred music,” member Valerie “Gail” Williams said. She and fellow members Alison Johnson and Taffie Ann Bentley then harmonized songs like “Wade in the Water,” which was meant to remind slaves to walk in water so that the hounds couldn’t catch their scent, Williams explained.

The two-and-a-half-hour event evidently ranged, yet the thread of dreaming prevailed. And by the end, it was clear that dreams are, as TEDxCCSU’s slogan reads, “ideas worth spreading.”